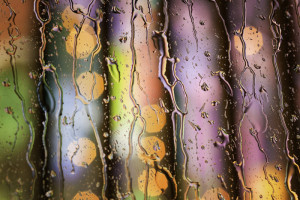 During a three-day photography trip to the Gulf coast of Florida, a massive rainstorm trapped me in my hotel room for several hours.   My friend was sleeping the storm away.  Although the sound of gentle snoring seemed somehow to harmonize well with the thunder outside, I found myself becoming increasingly restless.  I had come to Cedar Key to create images, not to sit in a room.  In my boredom, I opened the curtain to the balcony and looked outside.

The view that greeted my eyes was that of rain-streaked glass doors.  Vibrant colors that literally spanned the spectrum were contributed from a gaudily painted tourist motel, located perhaps one hundred feet away.  Although I was primarily in the area for landscape photography, I was excited by the colors in front of me, and by the rapidly changing patterns formed by drops and rivulets racing down the glass.

While my friend continued to doze, I set up my camera and tripod, positioning them so that the lens was as close to the glass as possible while maintaining the ability to focus.  I set the aperture as wide as it would go.  I wanted to record an impression of color, movement, line, pattern, and texture.  Rather than a representational artwork, I sought to create an abstraction.  Setting a wide aperture caused most of the background to blur.  Focus was only about one or two millimeters deep, and restricted to only the very crests of the tiny rivulets running down the glass.

Among the photographs created that day, I selected this one as displaying the most pleasing patterns.  Later, when I printed it at an image size of 22×32”, I noticed a number of fascinating optical details that were invisible to me on the LCD screen of my camera, and barely noticeable at smaller print sizes.

Water was acting as a magnifier.  The balcony railing was located about eight feet beyond the glass.  Even though the image was intentionally soft focus virtually throughout the photography, parallel bars (balcony railings) appeared tack sharp within every rivulet and drop of water.   Similarly, lights on the side of the distant motel were also reasonably sharp.  Outside of water features in the photograph, the background is a nice blur of vibrant color.  Within the water only, specific physical objects can be seen clearly.

Water also acted as a prism.  Each rivulet inverted adjacent colors.  For example, if tangerine hues could be seen by the eye as background colors on the right of a given rivulet, and pistachio on the left, a close examination showed that tangerine was visible on the left side of the rivulet “wave”, while pistachio was displayed on its right.

This is an abstract artwork that, in addition to possessing an unusually broad spectrum of colors interlaced with lines, patterns, and interesting textures, also exhibits optically fascinating effects based on the magnifying and prismatic qualities of water.