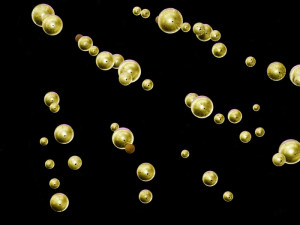 It was Christmas time.  I was visiting my relatives in Los Angeles.  One afternoon we got in the car and went out for some sightseeing.  At one stop, a tall arch was located at the entrance to a building.  For some reason, I looked up as we walked under it.  To my delight, I saw what looked like hundreds of huge golden ornaments dangling from the interior apex of the arch on long cables.

My family walked on and into the building.  Temporarily lost in imagination, I stayed where I was, gazing up at the globes.  The more I looked, the more I began to see patterns.  I saw grouping where, in fact, none actually existed.  It was just my mind doing what my mind does–finding patterns, seeing something special in the details of something relatively mundane.   Huge ornaments suspended from an arch are not exactly mundane, but ornaments at Christmas are common enough.  I imagined them as planets floating in space.

When I developed the photograph, I allowed myself to play.  Instead of recording reality, I wanted to create an image that revealed the globes as I envisioned them.   To obtain the effect I wanted, I erased the superstructure of the arch by painting it black.  Then, to create the visual sensation of spheres floating in the void, I similarly erased the cables that joined one to another.  The final abstraction is very close to what I imagined when I took the time to stop, look up, and allow my imagination to freely play.