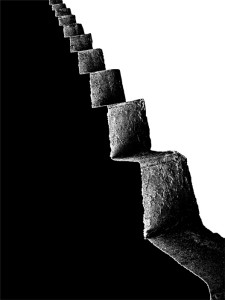 It was a glorious afternoon on the Gulf of Mexico.  I was enjoying a day of boating and fishing off the coast of Tampa, Florida.  The weather was perfect.  Skies were clear blue.  The waters were a subtropical green, tinted with the white of the sand below.  Since the fish weren’t biting, we pulled in our lines and motored over to Egmont Key.  Swimming in the warm water there was a real treat.  I decided to wade ashore with my camera and explore Fort Dade, a massive construction dating from the Spanish-American War.

I was walking up an exterior stairway when I noticed the shadow cast upon the steps by the midday sun.  Due to the shape of the stairs, the shadow was zig-zag.  Due to the high contrast conditions at that time of day, the wall receiving the full impact of the sun was almost full white while the shadowed area was very dark.  The shadow cast upon the stair by the wall had medium tonalities, mostly in shades of gray.  The spectrum from black to white was really cool.

I accentuated that when I processed the photograph.  Whites were transformed to pure white.  Blacks were rendered as complete black.  While I was doing that, I was surprised to discover that tones in the stairway shadow had inverted, and they had done so in some very interesting ways.  Tones in juxtaposition to black were lighter while those next to white tonalities were darker.  Exfoliating concrete provided texture.

The resulting abstract has as its central feature something that never existed in tangible form.  Only the stair walls and steps were physically real.  Yet, in effect, those both disappeared when I developed the photograph, leaving the visual emphasis on the shadow.