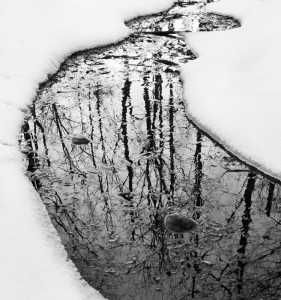 A former college student of mine wanted to go winter camping.  I have experience with this from snowshoe and cross-country ski backpacking trips in New Mexico and in the Cascade Mountains of Washington State.  I was glad to introduce him to this form of camping.

We arrived at our destination around 10pm.  The forest was pitch black.  Shouldering out packs, with snow crunching beneath our boots, we walked downhill toward a small stream that I knew about from previous walks in the area.  Our flashlights carved thin beams of illumination in the velvet darkness.

Once we reached the stream, we stomped the snow flat with our snowshoes and pitched our tent on that smooth platform.  We were both looking forward to a hot dinner.  Unfortunately, neither of us brought fuel.  Stove, yes.  Fuel, no.  Dang!  We got a good laugh out of that.  Dinner was cold, but we enjoyed it nonetheless.  Then we gathered wood and made a small fire.  It was really nice to stand next to it and feel its warmth.  The way that flames threw patterns of light and shadow into the surrounding woods was beautiful.  We talked for hours.

I woke up at dawn.  My camping partner was still curled up and snoozing in his sleeping bag.  Quietly, so that I did not wake him, I dressed, grabbed my camera, and went outside.  The first rays of the sun were painting the horizon a pale yellow.  That color was reflecting in the stream.  Also reflecting there were numerous leafless trees.  Those, along with the curvature of the watercourse and a few smooth stones protruding from its still surface, was quite striking—a study in graphic design.

Because color was not the dominant characteristic of this photograph, and because I wanted to emphasize its graphic elements, I have rendered it in black and white.  This image, like several others I created during this period of my artistic development, is transitional.

A friend of mine discovered that when this image is viewed upside down, it assumes an unusual three-dimensional quality.  The water seems to rise up from the page, almost as if it were mercury poured onto a table.  The trees and stones take on an even more abstract character.  It’s really interesting!  This is an artwork that can be enjoyed in two orientations.  Very cool.